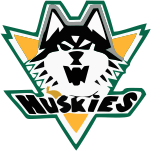 This was a wild one!
Cole Diewert’s goal with 14 seconds left in the third period tied the game 8-8 and the Grimshaw Huskies went on to defeat the High Prairie Regals 9-8 in a shootout.
The Huskies led 6-2 after one period before the Regals rallied to close the gap to 7-6 after two periods.
What was anything but a defensive gem turned into one in third period as the goaltenders were phenomenal – Bud Dyck for the Huskies and Matt MacMinn for the Regals – as the teams went scoreless the first 15 minutes.
But Ira Gladue scored twice late in the period to give the Regals their only lead of the night before Diewert’s heroics.
But the fun was just getting started.

In overtime, Damian Cardinal took a slashing penalty putting the Huskies on the power play. HP’s Lloyd AhKimNachie was stopped on a breakaway, then the Huskies hit two goalposts. With 45 seconds left in overtime, the Regals also hit the iron and a shootout was left to decide the winner.
As bizarre as this game was, the game-winner in the shootout was a fluke. Ty Wiebe’s shot went off MacMinn’s shoulder, off the crossbar, bounced back to hit MacMinn before going into the net.
Jacob Anderson could have tied the game after deking Dyck but he relaxed for a second instead of burying the puck and Dyck flew his hand across the crease to make a spectacular save.
Bond Hawryluk’s goal sealed the win.
Matt Flette scored twice for the Huskies while Bond Hawryluk, Brendan Hawryluk, Ty Wiebe, Brandon Bogdanek, Cole Diewert and Colter Wiebe added singles.
Ira Gladue scored three goals to lead the Regals, while Chris LeGresley, Luc L’Hirondelle, Jamie MacMinn and Damian Cardinal added singles.
The Huskies [3-0-1-0] remain undefeated in regulation this season and pulled into first place in the East Division with the win, while the Regals earned their first point [0-4-0-1] and remain last in the East.
The Huskies’ win snapped a two-game slide in High Prairie but they have still won seven of the last nine meetings in High Prairie.
Of note, the Regals have yet to win an NPHL game in a shootout. The NPHL adopted the shootout in 2006-07.